Posted at 18:40h in Interviews by LWDadmin
0 Likes
Share

Garry Kousoulou seo daddy daycare a program that teaches us social media can lead to anything.

Daddy daycare came about purely because of a Facebook advert. My wife questioned my choice on how to discipline our eldest son Lucas, I then was accused of being a weekend dad!

looking at Facebook all those years ago could only be done on the PC and an advert flashed up saying does your wife think you’re a weekend dad.

The rest is history on how the program was watched by close to 10 million people and all over the world all thanks to Facebook.

SEO & Social Media ✅ Everything done for you. Help you get ahead in the world of digital, For Brands, individuals, and businesses. Love making a difference to business owners #Digial #Strategy

Career man Garry kousoulou took part in a new Channel 4 show in which fathers were given a crash course in childcare. what is the show about?

Some men are useless with kids. And some shows really don’t help the issue.

I hope that daddy daycare shows the real issue of men being in daycare. British women do twice as much childcare as men, and nearly half of all mothers feel that their partners don’t do their fair share.

The nation’s mums have had enough. In this series, men are sent on a crash course in childcare by their long-suffering wives and partners. A workaholic father-of-three, reluctant dad-of-one and nervous father-to-be spend a week working at South London nursery

digital marketing is the answer

Garry Kousoulou seo expert goes behind the scenes of Lorraine for an interview on Daddy Daycare and Social Media. What an experience! To be watched by 5 million people.

Read the review in the Guardian

Daddy disaster! There were tantrums when these hands-off dads took charge for a new TV show – and it wasn’t the babies who were in tears…

By JENNY JOHNSTON FOR THE DAILY MAIL

When it comes to raising a laugh in a TV documentary, you can’t fail with the man-changes-nappy-for-the-first-time scene.

But surely if you’re featuring men who have been dads for years, and in this age of supposed equality, it would be impossible to find such a novice? Well, er, no.

The producers of Channel 4 series Daddy Daycare unearthed an astonishing array of long-time dads who had never got to grips with the business end of a baby – and the show documents how their attitudes to fatherhood change when they are finally catapulted into the full-on childcare experience.

Take Paul Wallace, an AA man and father of three, aged from nine months to teenage years. Until he signed up for the show, he was proud he didn’t do night feeds or nappy changes. 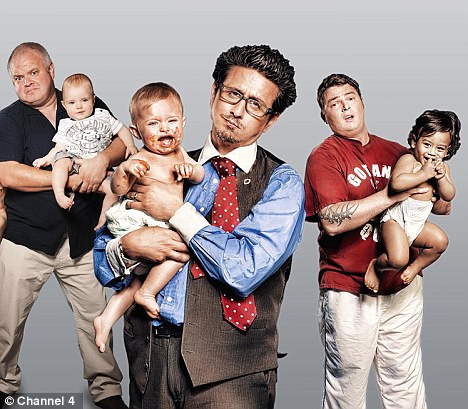 ‘Yes, I was a bit of a dinosaur. Nappies? Yuk! Why would a man want to do that, when women are better at it anyway?

I was out earning and my missus, Sally, did everything to do with the kids. I thought I was normal, and in some ways I am. There are still lots of guys like me.’

He is right. Nine hapless dads were signed up for the three-part series, and they are taken in hand by professional childcare experts –

all women – and forced to confront their attitudes. They are marched to a nursery and asked to cope with dozens of other people’s children for a day.

The result? Possibly the messiest TV this side of Casualty – and hilariously horrifying.

For the men, it was a rude awakening. Paul admits he went in ‘thinking I was Rambo, able to cope with anything, and came out ‘humbled’. 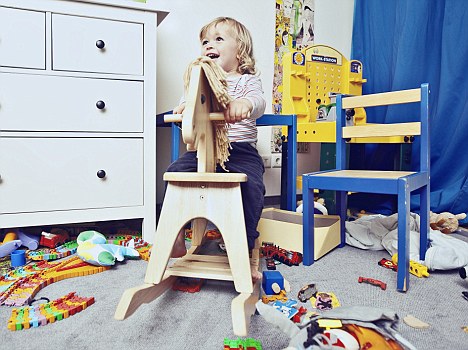 Challenge: All of the men got more than they bargained for when they entered the nursery (stock picture)

The nursery staff listened to his rantings about how nappy changing isn’t a job for proper men, then handed him the smelliest child they could find and some plastic gloves. ‘Women who look after children for a living aren’t paid enough,’ he says now.

‘Before I did the program I thought Sally had it easy. I thought she basically sat around watching TV, waiting for me to come home. And I used to resent it then if she asked me to hold the baby while she nipped out.

‘But after my shift in the nursery, I’ve never been so exhausted. I got home and said, “OK, you win, you have a hard job.”‘

Another of the dads, Garry Kousoulou, tries to articulate his trauma during the filming process, saying, ‘It was all going off around me, and I just had to hold it together.’ He sounds more like a war-zone survivor than someone who’s tried to organise a storybook session with two-year-olds.

Before I did the program I thought Sally had it easy. I thought she basically sat around watching TV, waiting for me to come home

Garry is a self-confessed workaholic who runs two opticians’ stores. He leaves home before his three sons, of six, four and one, are up and returns after they are in bed. He signed up to the show to ‘prove a point’ to his wife, Lia, who, he says, had accused him of being unwilling to engage with family life.

The challenge of being on a program on national television is as well as the television studio promoting you need to use your social media influence to also promote whether that be on any channel whatsoever Cos they need that extra push.

It is a challenge to keep your mindset right you really need to humble yourself down because you really are in the center of attention and coming from just being a regular person to being on chat shows and radio shows Bing driven around in limousines is not a reality.

The other big challenge is to turn your instant overnight success, into long-lasting success.

My advice to anyone reading this article about going on a reality TV show is to use the hottest platforms that have happened to around say tick-tock.

We see The Apprentice doing very well when people watch the contestants same with Instagram you will use your social media success run alongside the program.

Careful what you ask for!

I often longed to be on television but having a camera crew follow you around from the minute you wake up to the minute you go to bed is challenging.

reality TV is much like social media but with nowhere to hide.

Daddy daycare definitely taught me about distribution. So if you have a social media audience it’s not that difficult to distribute your content but television has this wonderful audience that watches without loyalty. Facebook groups have a common interest Instagram has a thing of beauty and is tied together by hashtag but this is still entertainment.

If you happen to come across something you’re interested in that then brings you into the realm of visibility and awareness. A master marketeer will bring that awareness into a sales final which will then create a customer and that’s what this is all about entertainment turning into a customer is the whole skill in itself

Let Us Solve All Your Social and Digital Needs.

You can find out more about which cookies we are using or switch them off in settings.

This website uses cookies so that we can provide you with the best user experience possible. Cookie information is stored in your browser and performs functions such as recognising you when you return to our website and helping our team to understand which sections of the website you find most interesting and useful.

Strictly Necessary Cookie should be enabled at all times so that we can save your preferences for cookie settings.

If you disable this cookie, we will not be able to save your preferences. This means that every time you visit this website you will need to enable or disable cookies again.

We are accountable for these principles and must be able to show that we are compliant.

We may hold and use any of these special categories of your personal data in accordance with the law.

This includes processing personal data which forms part of a filing system and any automated processing.

If you choose not to provide us with certain personal data you should be aware that we may not be able to carry out certain parts of the contract between us. For example, if you do not provide us with your bank account details we may not be able to pay you. It might also stop us from complying with certain legal obligations and duties which we have such as to pay the right amount of tax to HMRC or to make reasonable adjustments in relation to any disability you may suffer from.